With a wealth of rich history, culture and idyllic countryside, Russia is on top of most travelers’ must-visit destinations plus the flamboyant night life is one that everyone look forward to. Home to the famous Tolstoy and Pushkin and the fantasy-like gingerbread cottages of the rural Russia are what makes this nation a unique destination. As 16 percent of the population are Muslim, you will not have to worry so much when it comes to Halal-friendly amenities and places to pray. Here are some fascinating destinations to cover in Russia during your stay, 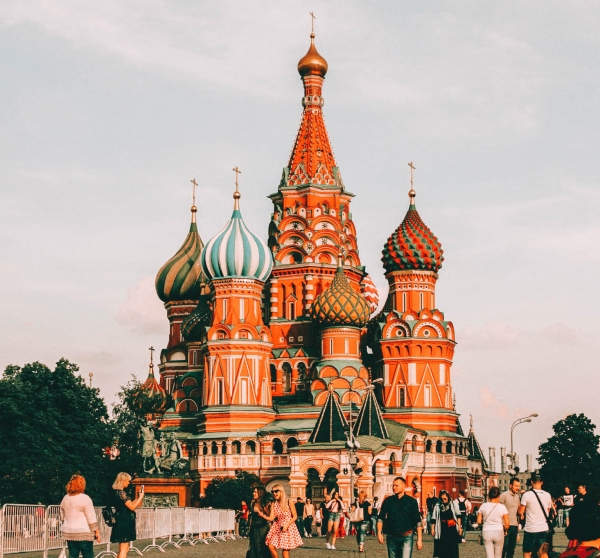 The largest and the most significant square in Russia representing its rich history, culture and untold tales of Moscow. No travel to Russia is complete without a visit to this scared grounds with landmarks such the Kremlin, GUM department store, the State History Museum, Lenins Mausoleum and St. Basil’s Cathedral. Back then, merchants all across the world visited Red Square for trading which later turned in to a market and on days of Church festivals, you will see masses of crowds gathering for processions in to an open-air church. As the Red Square is located in Moscow, you will be in for many options when it comes to halal-friendly lodging, food and amenities.

A fortress of Russia which is famous around the world and a symbol of the Russian State stands majestically in Moscow drawing multitudes of travelers throughout the year. You will see Saint Basils Cathedral, Red Square and the Alexander Garden to the East whilst displaying architectural splendor with monumental walls, towers and the golden-domed cathedrals settled on the Borovitskiy Hill above the Moscow River. There were many political and royal figures who used reside here back in the day and currently the official residence of the Russian President. One of the highlights of the Kremlin is the Armoury Chamber housing royal treasures and the Diamond Fund.

Also known as Lenins mausoleum is a well-celebrated leader during the revolution who died in 1924 and the state decided to bury him in an embalmed and a granite mausoleum on Red Square as a mark of respect. It also gave the idea and a belief on afterlife which is also what the ancient Egyptians believed which led them to construct pyramids to make their leaders immortal. It was later used by the communist party leadership to watch the parades from the top and several ceremonies were held. This is also a famous attraction in Russia visited by many travelers.

St. Basil’s Cathedral was built in the 16th century which is an orthodox church and a national treasure of Russia. It is of unusual beauty and legend says that Russian ruler Tsar blinded the architects who built the cathedral to prevent anyone else building a better structure than this but more tales were told that the architects continued to build more stunning churches in the country. The structure is a series of buildings, a central church surrounded by nine auxiliary churches, eight of which are dedicated to Ivans eight victories over the Tatars, and a smaller one consecrated to Saint Basil. You ought to pay a visit to this magnificent attraction during your travels to Russia. 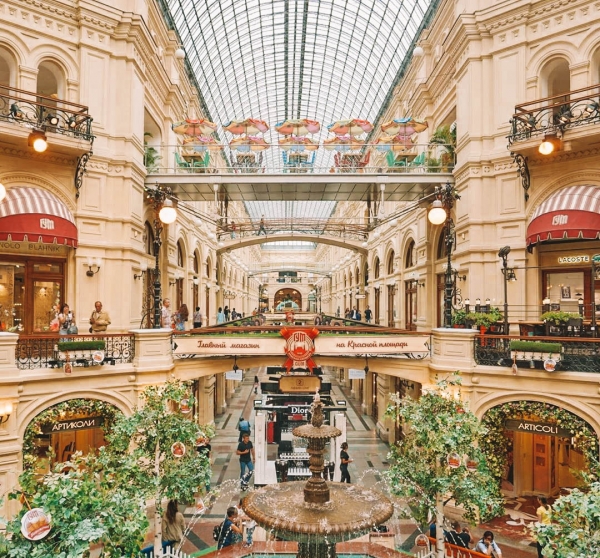 A very famous tourist attraction in Russia housing 200 stores where you could purchase just about anything from food, local produce, lavish clothing, souvenirs and even enjoy a meal in many of the restaurants. It’s definitely a shopaholics dream come true and for those of you who are traveling with the entire family, it’s going to be a lot of fun as you get to walk through the stalls and try all things local.

The Moscow Art Nouveau was quite famous in the 20th century where wealthy merchants and industrialists decided to live in fancy mansions dispersed around Moscow’s old center. The Art Nouveau is the Gorky House Museum is one of the best examples of these residences designed by Fyodor Shekhtel in 1900. The exterior walls are ornamented with a mosaic frieze depicting paradisiacal garden with orchids and other plants. Inside are patterns of pebbled shores and a jellyfish chandelier overlooking the Hall. This grand building was later given to the famous Soviet writer, Maxim Gorky, a prominent Soviet writer, who lived here from 1931 to 1936 and a museum opened in 1995.

Another prominent site in Moscow is the Kolomenskoye Museum Estate which is just 15 minute metro ride housing serene gardens, views of the Moscow river and beautiful old Russian architecture. There are plenty of ancient churches throughout around Kolomenskoye but the highlight is the Church of the Ascension which was also declared a UNESCO World Heritage Site. It’s probably the most eye-catching church in the whole of Russia and while you’re in the premises don’t forget to visit the House of Peter I, the only memorial museum devoted to the famous Russian Tsar.